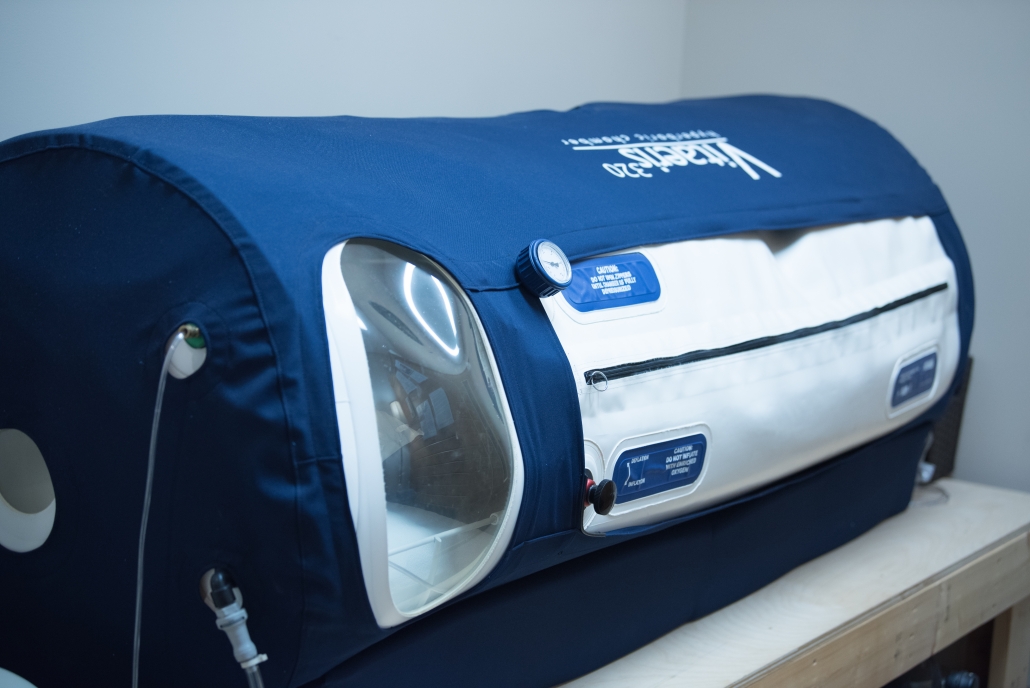 What is Mild Hyperbaric Therapy?

Mild Hyperbaric Therapy is a medical treatment in which a person is exposed to increased atmospheric pressure inside an inflatable chamber. The typical pressure reaches between 1.1 and 1.5 atmospheres, which can also be expressed as 3 to 6 pounds per square inch. The increase in pressure allows more oxygen to reach the cells of the body, which has many healing and therapeutic benefits.

How Does it Work?

According to Henry’s Law of Physics, an increase in atmospheric pressure allows more gas to be dissolved into any given liquid. Henry’s Law is displayed in every can of soda. When soda is canned at the factory, it is put under pressure so that more carbon dioxide can be dissolved into the soda, causing it to be carbonated. When the can is opened, the pressure is released. Without the pressure to keep the gas dissolved, the soda will become flat in a few hours.

This same principal applies to oxygen and plasma, the liquid part of blood. When the body is under pressure, plasma, cerebral fluid, and synovial fluid will dissolve more oxygen than they would if they were not under pressure. Not only does this increase the amount of available oxygen in tissues, it allows oxygen to reach areas of the body that would normally be difficult to reach.

Hyperbaric Therapy as an Immune Modulator:

Mild Hyperbaric Oxygen Treatment in a portable chamber, at 1.3 ATA and 24% oxygen, administered daily for 10 consecutive sessions (1 hour each) has been shown to improve brain function as measured by SPECT brain scan and a test for attention and reaction time.

Patients often report a sense of well-being and youthfulness after therapy. Studies show that it positively affects immune function, increasing natural killer cell activity and decreasing apoptosis values. Since apoptosis numbers increase with age, the reversal of that process may have significance with regard to aging.

What Conditions Can It Treat?

45-60 minutes, 2-3 times per week for 4-6 weeks. Future treatments would be required to maintain health and fitness. Every person is different, and the specific reason for treatment will dictate the frequency and duration.

Yes! The hyperbaric chamber is completely safe. Since our chamber uses filtered ambient air, it can be used regularly without the danger of oxygen toxicity in the body. The majority of clients report a pleasant, comfortable experience. Hyperbaric Therapy is a safe adjunct to most other detoxification therapies.

**Series MUST be prepaid.
**Treatments must be redeemed within a 6-month period.
**Series cannot be transferred to another patient, to any other service or supplies.
**NO REFUNDS.
** A 24-Hour Cancellation Notice is required or the missed appointment will be deducted.

Click on the links below and be informed on all the services we offer at Longevity Health.

Click here to learn about our pricing for all of our services and supporting therapies.

Click here for a link for all services we offer.